Apparently people think living out of a suitcase and traveling the world seeking adventure is groovy, mysterious even. For that reason, I’ve found myself in the desirable position of being newsworthy, likable, interviewable and even described as a “poster girl for entrepreneurs who follow their heart and find themselves in places they had never dreamed of.”

I’m honored to have been featured in some fabulous places including Huffington Post, Yahoo Finance, Mashable, American Express Open Forum and Forbes. Places you’ll find more about my work or my journey as an entrepreneur and adventurer include magazines, podcasts and radio.

I’m also a contributor and guest poster for some amazing sites like Forbes and Visa Business Network. 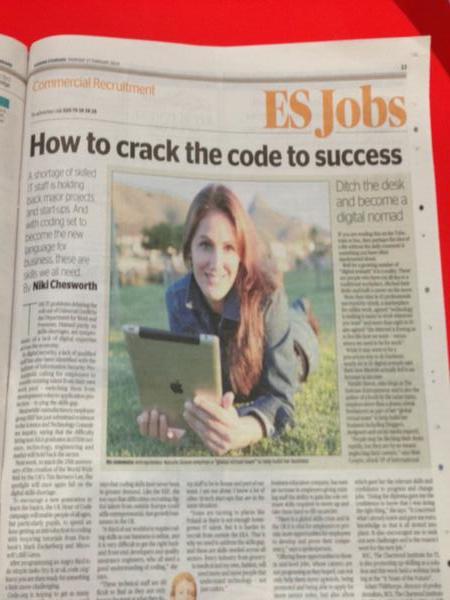 INC
This Entrepreneur’s Secrets to Being Productive From Anywhere in the World
– March 5, 2016

Business Insider
An entrepreneur who earns over $200,000 a year explains what it takes to work and travel all over the world | April 9, 2015

Huffington Post
6 Fempreneurs Who Built a Business From Their Backpack | February 4, 2015

The Sydney Morning Herald (online and print)
How to travel the world and get rich| March 13, 2014

The Sydney Age – Small Business
How to travel the world and make a fortune | February 20, 2014

The Next Web
7 ‘digital nomads’ explain how they live, work and travel anywhere in the world – December 15, 2013

Business 2 Community
What 14 Successful Entrepreneurs Have To Say About The Transforming Power of Documenting Procedures For Your Business! – November 13, 2013

Screw the Nine to Five
6 Tricks to Organize Your Business and Become More Productive – October 29, 2013

Successful Blogging
Blogging Your Way Round the World with Natalie Sisson – November 06, 2012

SidekickPM
Mindset, Building a Brand and the Cloud – March 30, 2012

Your Life Your Way
Why You’re A Brilliant Diamond In The Making – February 27, 2012

American Express Open Forum
17 Must Have Mobile and Web Apps For Entrepreneurs – May 4, 2011

CarolRoth.com
The 85 Best Technology Solutions to Help Your Business – January 26, 2011

The Entreprenette Gazette
How to Handle Things in Your Business that You Dislike Doing – January 26, 2011
Transform Your Old Product into a New One – December 14, 2010
Does your product stand out? – June 16, 2010

Escape from Cubicle Nation
Come See the Wonderful Things My People Have Accomplished in 2010! – December 31, 2010

Live Your Legend
57 Living Legends Expose The Moment that Defined their Passion – July 27, 2011

Problogger
How to Build A Thriving Blog By Being Yourself – May 19, 2011

Scoop Business
Become An `Authority’ To Maximise The Benefits of Social Media – October 4, 2011

Superhero: Armilegge
15 Real life Superheroes Who Will Save Your Life – May 27, 2011

The Uncommon Life
Candid Confessions from a Suitcase Entrepreneur – April 7, 2011

Janet Murray
Emotions and How They Influence Your PR Success (December 29, 2015)

Janet Murray
How to create a memorably brand with Natalie Sisson (November 26, 2015)

Nomad Together
Building a Business and Living Out of a Suitcase with Natalie Sisson (September 16, 2015)

The Growth List
How to Run a 6-Figure Online Business While Traveling the World (May 11, 2015)

Married with Luggage
Episode 109: Create Your Portable Business So You Can Have Freedom to Live Where You Want with Natalie Sisson (April 15, 2015)

Turndog
What To Do When YOU Are The One Preventing Your Own Business Growth: with Natalie Sisson (January 28, 20115)

YoPro Wealth
098: How to Create the Lifestyle & Business of Your Dreams – Natalie Sisson (December 4, 2014)

Navid Moazzez
How to Create Your Own Escape to Freedom Plan to Build a Business and Life You Love with Natalie Sisson (September 15, 2014)

ImJulie
Natalie Sisson on Creating Freedom Out of a Suitcase [HERO Edition] (September 5, 2014)

Tropical Entrepreneur Show
The Freedom Plan, How To Travel The World and Build A Business You Love with Natalie Sisson The Suitcase Entrepreneur  (June 18, 2014)

SuccessHarbor
Want a Location Independent Business? Natalie Sisson The Suitcase Entrepreneur Can Teach You How (June 17,2014)

Inspiring Innovation
How To Create Your Escape To Freedom Plan, Today! (June 10, 2014)

WP Curve
SSP 014: Rich and Happy to be homeless with Natalie Sisson The Suitcase Entrepreneur  (February 24, 2014)

Lifestyle Academy
How to Create a Freedom Based Business with Natalie Sisson (February 19, 2014)

Amy Porterfield
Creative Ways to Run a Business From Anywhere in the World with Natalie Sisson – November 14, 2013

Chris Ducker
How to Self Publish an Amazon Bestseller, with Natalie Sisson (October 11, 2013)

BlogCastFM
Narrowing the Focus of Your Business with Natalie Sisson – June 5, 2013

The Free Financial Advisor
2 Guys and Your Money: Making Life an Adventure – December 17, 2012

Bare Bones Biz
How to Run Your Business from Anywhere in the World – December 14, 2010

BlogcastFM
Natalie Sisson on Defining Your Audience, Diversifying Your Content, and the Power of Consistent Action – June 6, 2011

ProBlogger
How to Craft a Blog that Attracts Customers and Converts Like Crazy – September 10, 2014

e-Junkie
How To Build Your Dream Sales Team As A Digital Nomad – September 8, 2013

Bidsketch
How to Build Your Business Through the Art of Persuasion – September, 2013

Bidsketch
Real Life Examples of How to Raise Your Prices on Existing Clients – September, 2013

Bidsketch
Why Firing Your Clients Can Earn You More Revenue And Save You Time – March 19, 2013

Connected Women
How To Be A Worldly Entrepreneur And Take Your Business Global – November 8, 2012

LKR Social Media Marketer
How To Make The Most Of Being A Mobile Entrepreneur – August 9, 2012

Allied Women in Business
How You Can Create a Remarkable and Influential Brand – February 1, 2011

CityMax Blog
How to Choose the Right Tools to Streamline Your Business – April 6, 2011

How to Make my Blog
How Blogging Can Change Your Life – September 20, 2010

Metro-Blenz News Squad
Vancouver Eco Fashion and Robson Square Insanity – February 20, 2010
Being the Torchbearer in Your Business and Community – February 15, 2010

PR in your Pajamas
Do You Know Your Reach on Social Media Or Are You Out of Touch with Reality? – March 30, 2011

ProBlogger
THow to Build a Thriving Blog by Being Yourself – May 18, 2011

Reach Magazine
Sculpting your Business for Success – May 5, 2010

She Takes on the World
Time Management – Why You Need to Stop Stealing – October 26, 2010

Social Media Today
Who Is The Fittest Facebook Friend Of Them All – September 19, 2011
Mastering Social Media to Build a Thriving Online Business – June 30, 2011
10 Social Media And Technology Trend Predictions for 2011 – December 31, 2010

Under 30 CEO
The Number One Most Effective Tool for Entrepreneurs – May 18, 2011
Six Steps to Create Your Unique Story And Reinvent Yourself like Madonna – December 22, 2010