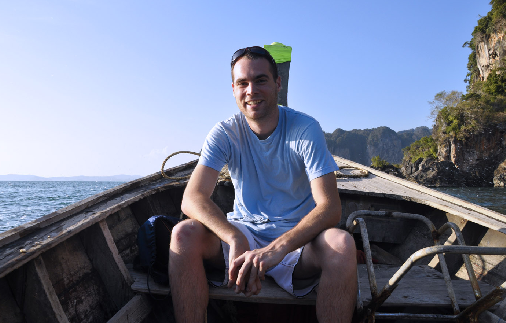 You can’t help but like Sean Ogle. He has an infectious energy, a great attitude to life, and it’s true to say he’s popular with the ladies (all his friends say so at least). More importantly he’s a location independent rebel and blogs about it to his adoring community.

We met at the World Domination Summit and instantly found common ground discussing our nomadic lives and love for freedom. He’s spent the last two years of his life learning how to travel and work from anywhere in the world too. You could say he’s the male version of me….Sean might put it another way, but hey, this is my blog!

Even though he graduated with a finance degree and had a job as a finance analyst for 2 years, he hated it and knew he wanted to be entrepreneur. So during this day job, he started creating a website listing his ‘bucket list’ to the public. He also taught himself SEO, and from that he managed to quit that job and build a lifestyle business consulting to small and large businesses. He has never looked back.

At the time I interviewed him, he was just off to shoot a TV segment on bucket lists and then embark on a delicious sounding trip to South East Asia, which I must admit I was slightly jealous of as it’s one of my favourite regions to travel to. Just before he left, Sean had launched his latest online program Location Rebel, where he teaches people how to turn their skills into business, and had sold out all 24 spots at $297 each, in less than an hour!

So let’s find out the real story behind Sean’s location independent lifestyle business and pick his brain on how you can do it to – if you’re up for it.

In this interview with Sean Ogle you’ll learn:

Click on the play button at the top or download this in iTunes or Stitcher Radio (and don’t forget to leave a review!).

Too many people use it as a one way stream of communication. Sean likes to use it as a two way conversation starter, often using his updates to ask questions to communicate to his audience. He also hearts Twitter as one of his key tools. Oh and you have to listen to the podcast to find out his favourite tool that drives him a ton of traffic.

Real story behind @seanogle location independent lifestyle business and how you can do it via @suitcasepreneur https://bit.ly/1g993dm

Leave a comment for this location rebel – anything goes.