In less than six hours the might New Zealand All Blacks rugby team will step on the field at Eden Park to play the French in the finals of the Rugby World Cup. I am just a little bit excited, as is the rest of the population of New Zealand.

Just to give you some context, when people asked me what brought me home to New Zealand after 5.5 years away my answer is, in this order:

For you non-rugby fans here’s some context. New Zealanders really do live and breathe this sport. We have the best team in the world and have done for over a century. I’m not being bias, it’s the truth. Yet the last time we won the Rugby World Cup was in 1987 (the very first time it was held in Australia and New Zealand).

For the last 24 years we have longed to hold the Webb Ellis Cup in our hands once again, not only our team, but the whole nation. Yes this is waaaaaayyyy bigger than Superbowl.

One of the largest sporting events in the World, New Zealand has played host to 20 competing nations and around 85,000 international rugby fans for Rugby World Cup 2011. Plus millions watching from afar on their TV sets, in pubs, clubs and other live venues like the 65,000 fans Welsh who packed out the Cardiff stadium a week ago to watch the semi final live on the big screen.

We promised a ‘stadium of four million’ (i.e almost our entire population) and we have delivered in every way. I’ve been to three of the games live now, including the opening ceremonies which were astounding and worthy of an Olympic event. I’ve watched over 70% of the games on TV for the last 6 weeks.

I’n not talking about people getting pissed in a pub discussing whether the ball was forward or not. I’m talking social media bringing the Rugby World Cup to the world online.

Clare Wolfensohn is the Manager of Online and Communications Projects at Rugby New Zealand 2011. That’s one heck of a job to have and as we close in the on the final of the Rugby World Cup that happens today in Auckland. I thought it would be great to share the results of their social media campaign.

What’s so impressive about this World Cup, aside from the fact that the New Zealand All Black’s are in the final and will beat the French (I was there in Cardiff 2007 when they lost to them and want revenge), is that they have established the entire Social Media Platform for the RWC host nations going forward.

I was lucky enough to attend their event for social media influencers before the RWC2011 even began, where Clare and the team presented exactly what they’d done to ensure that they were maximizing the likes of Facebook, Twitter and YouTube to drive huge engagement from fans all around the world.

As you can imagine at the last World Cup four years ago many of these platforms like Facebook and Twitter were still in their infancy and were not really predominant for showcasing world sporting events.

The social media campaign actually started back in October 2009 when they set up the main social media accounts and started the build up for the event (planning for the current RWC started right after the last one in 2007). For all of you who expect instant results in the online world take note that good things take time and effort.

Here is how they built out their social media campaign (thanks to Clare who was happy for me to share this information) and my personal investigation on where they are at now it’s the final day of the Rugby World Cup 2011.

Anyone searching on Rugby World Cup 2011 would find these main social media channels: 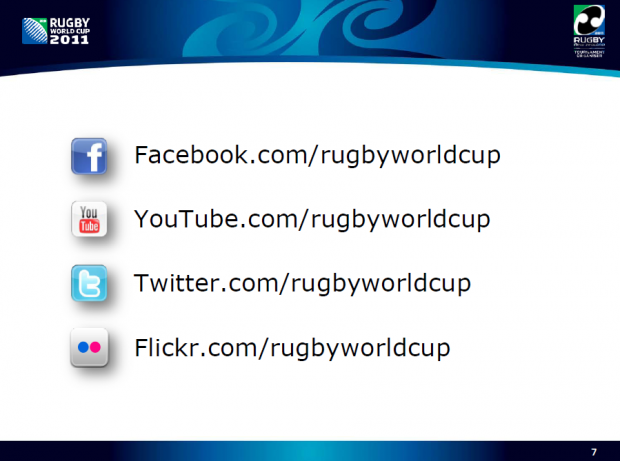 The RWC2011 clearly put a lot of planning time into their entire marketing campaign and the social media campaign was an integral part of it. They have some valuables lessons to share so listen up social media advocates:

It was imperative to have the same branding, messaging and integration across each of the platforms so that when visitors landed on their Twitter account page or their Facebook page they would instantly know it was the official RWC2011.

Each time they ran a specific promotion such as running a new Facebook application to drive engagement they would see large spikes in the number of new fans, up to 8,000 at a time in the space of a few days, but also general buzz across Twitter, their blog etc.

They used Facebook insights to better understand their audience which was predominantly young, males who spoke English, although it also highlighted the large number of French and Spanish speakers. From this they learned to increase the number of posts and tweets in other languages to ensure they were including this important demographic. 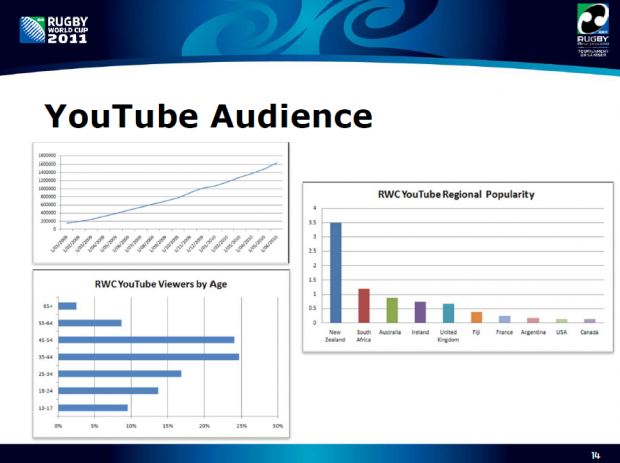 YouTube analytics showed them their main YouTube channel viewers were from New Zealand followed by South Africa, and they were in the older demographic of 35-54, a different audience to Facebook. From this they could cater to their videos to better suit their audience and customize the video content they put out.

They also have used the hashtag #RWC2011 very effectively and I know I’ve had several great conversations with fans from all over the world. Each day I’ve been scanning the stream and sharing opinions on games, players, refs and more, even before the tournament started. There have been some brilliant tweets too like these ones:

At the time of the presentation they had over 36,000 followers, today, just over 8 weeks later they have 113,350, and here’s an example of how they’re using Twitter to update fans and present great content.

Combined mentions on Twitter for #RWC2011, Teams and @rugbyworldcup now exceed 3.6million since September 1st 2011 (thanks to @justinflitter for that fact).

Top cities people were tweeting from before the tournament were 6% Auckland, 2% Wellington NZ, 2% Dublin, Ireland, 1% Cape Town, ZA. I’d say now it’s a much more international audience given the Australians, Welsh, Irish and English I’ve been tweeting with.

For the RWC2011 they used these social media tools to answer questions from tourist, fans and purchasers of the millions of tickets to the matches. Basically every question that was fired their way was monitored and answered where possible using social media in real-time. This worked particularly well on their discussion board on their Facebook page for successful ticket applications and queries around them.

By providing a fast turnaround time they received a lot of positive press from fans who were impressed with the service and answers they got.

Another way was to build up goodwill through a dialogue using Flickr for the RWC2011 Roadshow when the Webb Ellis Cup (one of them) toured the country and fans got to follow it’s progress and snap photos and comment and share them.

I missed out as it happened in the lead up to September and during that time they had 22,000 visitors to their Flickr page, amassed 12,000 photos which were viewed 40,000 times. You can bet that figure is four times as much now.

By securing these social media accounts now and for the future the Rugby World Cup is in good hands with all that brand equity, good will and massive online presence. 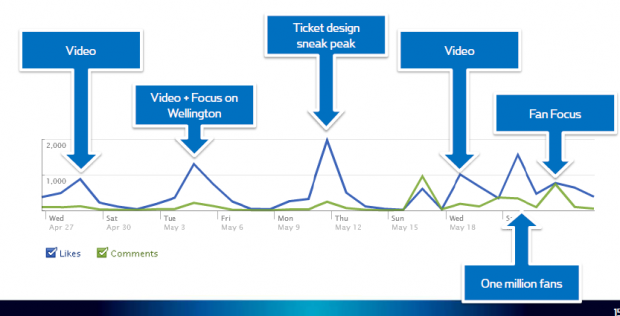 Examples include The World’s Biggest Scrum game, Fan Personality Test, Spot the Ball and the Leaderboard for ticket buyers.

Of course in the lead up to the tournament, and during it, the RWC2011 and the International Rugby Board (IRB) have had a huge amount of press attention cast upon them. As with any major sporting event, despite all the glowing reports, there will always be critics. During the tournament the main criteria for RWC2011 have been the following:

In terms of crisis management here is what they did:

They knew how important it was to manage social media real-time during any potential crisis, especially as the benchmark and face of all future Rugby World Cup tournaments to:

From my perspective I think they’ve done a fantastic job at fully engaging across the right social media platforms and bringing the conversation to the fans, in real time, and in an open and engaging way. They’ve not shied away from any situations – both positive and negative, and have remained responsive and accessible.

Across Facebook, Twitter, YouTube, their Blog and Flickr they’ve asked and answered questions, stimulated debate, shared appropriate links and stories, engaged with fans from around the world and provided one of the best social media campaigns I’ve witness from a large sporting event with an international audience.

Along the way I’m sure they’ve helped spread the word about the fantastic game of rugby and brought a new breed of fans, not only to the game, but to New Zealand tourists.

So how do you think RWC2011 have done in creating a winning social media presence?

PS the title of this post is a tongue in cheek response to the typical phrase used in speeches by players, coaches and commentators: ” Full credit to the guys, they played hard. Full credit to the opposition, they put up a good fight It’s a game of two halves, and rugby is the winner on the day”.