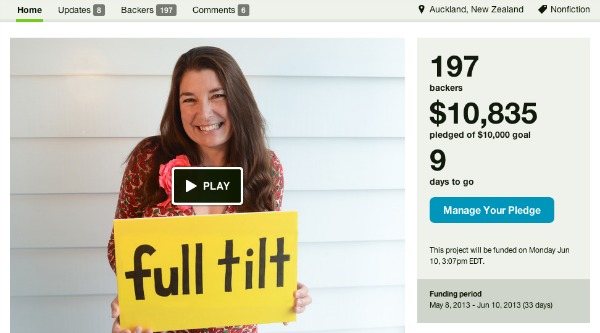 In March this year my Kickstarter campaign for my Suitcase Entrepreneur book went live, and in just under 30 days I raised over £6,000  from close to 200 people. That book is now published! Check it out here.

I surpassed my crowd funding goal and reached 121% of my target to put towards my self-publishing efforts. The experience was nothing short of amazing – but it was also a lot of hard work.

So I decided to write a complete guide to doing this yourself. What’s more, I went out and interviewed four others who have completely blown their campaigns out of the water to the tune of half a million dollars collectively!

You can get it here at suitcaseentrepreneur.com/kickstarter-guide

Today though I want to share 7 tips that you can use to implement for any crowd funding campaign you might have been thinking of starting. The tips apply to running any campaign online that requires buy in from strangers!

Plus, I share exclusive content from this new Kickstarter book, and share a little from fellow New Zealander Rebekah Tyler’s touching story, and how she smashed her crowd funding goal just last week.

Last week I pledged over $600 to a fellow Kiwi’s (aka New Zealander’s) Full Tilt Kickstarter campaign because it simply blew me away! (You must watch her video and you can still contribute too).

Rebekah put her campaign together to self-publish her own book Full Tilt and has already reached her goal of US$10,000 half-way through her campaign. And for good reason too; she did so many things right.

I got an exclusive interview with her on the day she was fully funded, and it’s coming out in an upcoming podcast episode, but as a special treat I’m going to release some special content today that’s contained in my new Kickstarter Guide.

I sent off my book proposal to quite a few London and New York agents and got lots of rejection letters. I didn’t take it personally thought, it just made me more determined.

Nothing was going to stop me and I knew I had to find a different way to publish my book.

I basically came across Kickstarter when I was just looking at the computer one day. And I thought, “Wow! This is a fantastic idea.”

It’s a platform where you put your project – it can be any project that’s creative, so fashion, video, writing, technology, dance, food, anything that’s creative. And you launch your project for a particular amount of days, in my case, it was 33 days.

Then people who are interested in creative projects, come to Kickstarter and may view your campaign, and after reading through and watching your  video, they decide whether they like it or not and if they want to support you.

Essentially what they do is they pledge money to fund your project. So in my case, I’m raising $10,000 to fund the typesetting, cover design, printing, proof-reading, all those sorts of things. And that will just basically kick-start my book into being published.

In my case I chose $10,000 to cover my self publishing costs and broke this down in the video so people knew upfront where there money was going. Half way through my Kickstarter campaign I reached that goal, which felt amazing.

I think that one of the most crucial thing is to make a really good video that draws people in and really reflects you.

That’s because on Kickstarter people back the person who’s created the project more than the project itself. They believe in the person and they want to help that person because they know they’re trying their hardest to fulfill their dream.

You don’t have to spend thousands of dollars and can even do it on your iPhone. But you do have to craft the story that resonates. Plus, consider the long term benefits of having a great video that acts as a showreel to use again on your website, as social proof etc.

It is important is to have really interesting rewards. For example, one of my rewards is not related to writing, but it’s related to my old profession. I used to be a chef and trained in London a long time ago.

So one of my rewards is to cook dinner for up to 10 people in their home and also, travel to your book club and bring each member a copy of my book and homemade cake, cooked by myself. Quirky things like that go along way and are really popular.

Like anything you do in life, it’s what you put into it that counts. I know that’s a bit of a cliché, but it’s absolutely true.

And I think a lot of people don’t realize that Kickstarter is incredibly exhausting if you do it properly. Along with my online campaign I’ve been out on the streets hitting people up.

I’ve got a yellow trailer that we pull on the back of my bike and it’s got a great big sandwich board and with my face plastered on it. And it’s basically like a political campaign.

Nobody in Auckland, New Zealand has been safe.  I’ve been up to the writer’s festival. I’ve been to the supermarket. I’ve been accosting commuters as they come off the ferry and just about every single person in Auckland has had a flyer thrown in their face.

I’ve also been frantically sending emails and messages on Facebook. I’ve been sending quite a few friend requests to fellow single moms who I think would really love my book, and they’re accepting my friendship!

All in all I took around two weeks to put my campaign together. This included scripting my video, planning it out and filming it. As well as the actual write up in my Kickstarter Campaign description.

What’s more, I researched other successful campaigns similar to mine, on different platforms too, that had succeeded and why. I paid particular attention to which reward levels were popular and crafted my own around them.

The actual campaign creation took just over 90 minutes because I had all this information to hand. As you’ll read about in my new Kickstarter guide, Katie Rock and her team spent close to a full year in advance of planning!

You can see the results of their success, and why that totally paid off, in my latest podcast episode on how they raised $67,926 and launched their new Activyst product line.

6. Engage your network with an outreach campaign

As I write about extensively in my new book, and the successful case studies I profile share, it’s all about engaging your community. The more of a community you have, honestly, the more successful you’ll be.

But even with a small list, blog audience and network of friends, family and supporters, you can still make a huge impact. You have to be prepared to put in the work, as Rebekah points out, and have a campaign strategy to continue to promote during the entire period.

Your campaign will naturally have dips and lows, and it’s up to you to craft creative ways to get the momentum going again and incentivize people who’ve already pledged to help out, for example giving them `click to tweet’ messages and swipe copy to share on Facebook, etc.

Can’t wait for you to see what’s included and learn how to essentially kick start your own campaign or business today.

7. Update your campaign with calls to action

During the course of my campaign, I updated my Kickstarter campaign description with some social media shares people could use directly from the page, as well as some more photos and information – in answer to questions I’d be getting.

I also posted more public updates (Kickstarter allows you to just message your backers, or to post public messages). These can then be shared by people visiting the campaign, even if they don’t pledge.

All this leads to more buzz and potential eyeballs on your campaign for you to make the most of.

What actions can you take next? 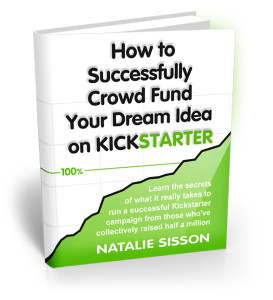 Well aside from supporting Rebekah’s campaign, you’d be seriously missing out if you didn’t get a copy of my new book:

How To Successfully Crowd Fund Your Dream Idea on Kickstarter

1. What Exactly Is Crowd Funding?
Learn all about this fundraising phenomenon and why you should take advantage of it.

2. Which Crowd Funding Site Should You Choose?
Discover the advantages and disadvantages of the top ten crowd funding sites and see which one is right for you.

3. What Makes a Successful Crowd Funding Campaign?
Learn the key components that will ensure your campaign meets and exceeds its goals by learning from seven inspiring case studies.
Plus you get four in-depth interviews (audio recordings plus transcripts) from those who collectively raised half a million dollars!

4. Step by Step Campaign Checklist:
Take the pain out of setting up your campaign by following this complete guide for before, during and after.

5. Campaigns That Failed and How To Avoid The Same Fate
Take a look at these two campaigns as an example of what not to do with your crowfunding campaign.

6. The Future of Crowd Funding
Hot trends come and go, and crowd funding won’t be the same in a few years time. Learn why, and be prepared.

7. Extra Resources
Get your downloadable checklist plus tools and resources you can use for yourself covered in this guide.