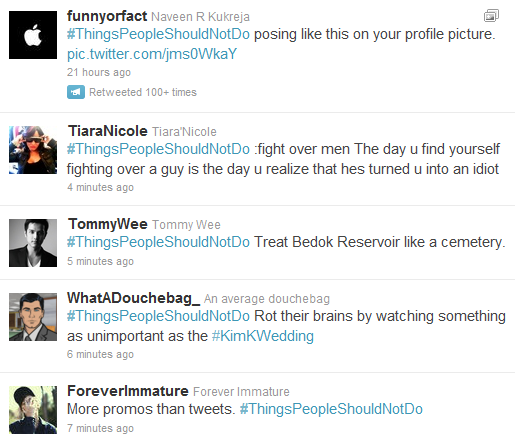 In honour of Social Media Month here on this blog (not in the whole world which I’m touched somebody thought it was after reading it here…) I want to focus on my favourite social media tool, Twitter.

Perhaps it’s the brevity of Twitter, the succinctness it forces people to adopt in a world where people love to over explain things. Or perhaps it’s the fact that it can be super fun to just tweet, retweet, DM and join the conversation to talk about highly interesting topics or your fluffy cat.

I mean seriously Twitter has so many benefits that I love and it’s my number one driver of traffic to my website. Yet two and a half years ago I thought it was the silliest thing in the world and I had absolutely no idea what to tweet or how it all worked – I mean did I just visit the Twitter website or was it some secret society I could only see if I logged in?

Ah those were the days and now look at how far I’ve come… yes I made the Forbes List 25 Most Influential Women Tweeting About Entrepreneurship. But really what does this mean? I GET Twitter. It is my marketing, sales and customer service team rolled into one.

It’s the best source of real time information on the current trends that matter (and some that really don’t) day in and day out. It’s a hang out joint where your friends are, where great discoveries can be made and lives can be changed (think of earthquake relief funds, twestivals, Steve Jobs tributes).

So in the interests of time, you busy people you. I’m giving you the skinny on why Twitter rocks:

Want to get retweeted more then stick to the optimum amount of characters which is 130 (longer tweets generate more clicks according to Hubspot) and tell the world about your new product launch, latest blog post, breaking news, or – if you must, what you just did on the toilet.

You can find the best stuff on Twitter including inspirational quotes which are one of the sure fire ways to get retweeted and gain followers. In addition you can be provocative and put out your opinions to create quite a tweetering (made up word I’m claiming). Want to become savvy on Twitter – tweet great stuff out that inspires or impacts people.

Use Twitter lists `to-do’ your work for you. Find interesting people under categories you’re interested in on Listorious and follow the best looking people – or preferrably the most interesting, then add them to your Twitter list(s) so that you can tweet out their stuff daily and clear out the clutter from your home stream (which by the way you should never really need to look at).

While we’re at it if you want to unfollow people who have inactive accounts or just aren’t up your alley anymore, a little spammy or perhaps even not following you (shame on them 🙂 then use ManageFlitter unfollow people in one hit.

If you’ve not yet done so then sign up to Su.pr and submit your tweets here to get more traffic and views via StumbleUpon. Plus install the WP-Plugin so that each time you post a new blog it sends it out with a shortened trackable StumbleUpon link.

If you’re one of those people who still has no image associated to your Twitter account then please put one up. People trust people not images of an oval egg. Also put in a bio – you get up to 160 characters to get super creative and put in the right keywords to draw peoples’ interests for 5 seconds or less.

If you’re hankering for what to say on Twitter then ask questions, float ideas, post polls and expect fast feedback as your following grows. If you’ve launched a product, new store or new campaign, use search.twitter.com for mentions of your brand, name or Twitter handle.

Just like when you walk into a book store and look for the categories your book may fall under, the same applies on Twitter with hashtags. It’s a way of categorizing who might be interested in your tweet and no, nobody owns a hashtag – examples are #socialmedia #travel #sexylingerie and for a real treat look up what’s trending on Twitter like #thingspeopleshouldnotdo

10. Use The Power of Hootsuite

If you want one social media management dashboard then Hootsuite is my top recommendation. Ever since I started using it earlier last year, it’s made my life on Twitter immeasurably easier. It’s my number one most used tool for managing not only my two Twitter accounts but also post to LinkedIn, Facebook – both my page and my profile and even more like tracking analytics, keywords, mentions and streamlining lists.